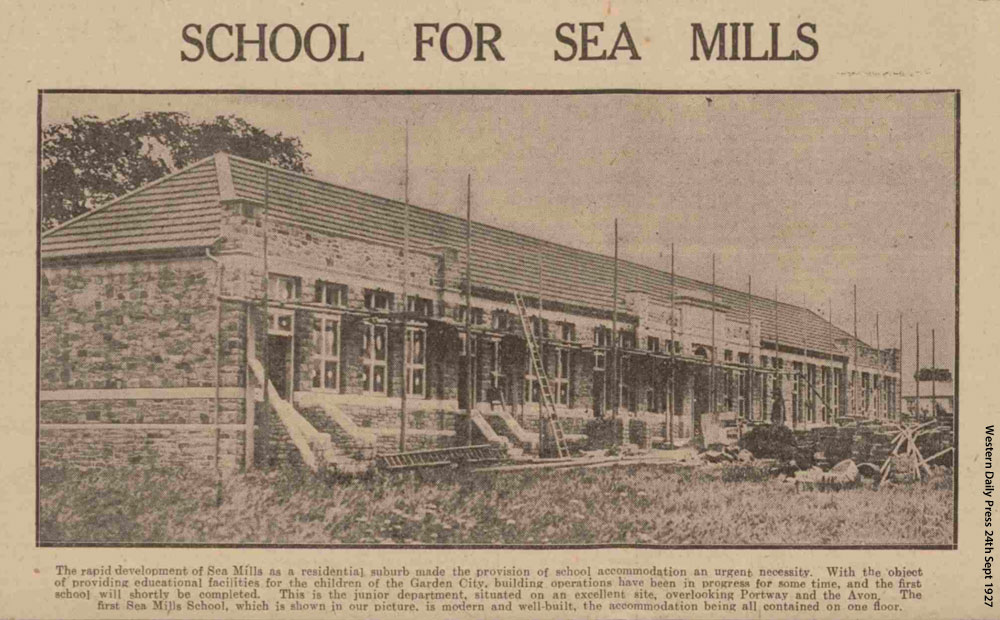 Until 1927 there were no school buildings in Sea Mills. Prior to this, St Edyth’s “Church House” had been hired by Bristol Education Committee from the Church Council as a temporary school for the growing numbers of children in Sea Mills.

The Church House or the “black hut” as it became known locally was purchased by the church committee at an “aerodrome sale” at Filton on 20th Jan 1921 for the sum of £107.10s. It is described in the catalogue as “72ft long x 25ft wide x 10ft. Wooden Hut, raised from ground level on wooden posts, and providing accommodation for 44 men… Roof – pitched boarded and covered Ruberoid. Asbestos lined throughout, including flat ceiling. Floor – boarded. Wired for two electric lights. Provision for heating by three stoves. Lit by 22 windows. By October the building was in operation as a Church with the first service held on the 8th. (Bristol Archives – St Edyths Record and Minute Books P.stEd/x/1)

In February 1922 the church record book notes that 58 children had been attending school and lists 6 teachers.

In the Western Daily Press of 13th August 1927, “Dominie” reported that: “In several districts on the outskirts of Bristol considerable anxiety has been aroused by the delay in the erection of the new council schools.” “This feeling on the part of parents”, Dominie reported, is particularly so amongst those “who live on the new housing estates”.

Across Bristol during the years following World War One, the outer suburbs were expanding rapidly. By the time the Junior Mixed School was formally opened on 15th February 1928, Sea Mills had “970 inhabited houses, about 40 or 50 built but not inhabited, and about 50 more to be built” (Bristol Times and Mirror 16th February 1928).

The design of Bristol schools at this time followed the same essential principles of the garden cities and suburbs movement which influenced the layout and architecture of the Corporation’s new housing estates. Like the garden suburbs, the schools were designed to maximise the availability of sunlight and fresh air for the pupils.

Prior to the war, from 1907-14, there had been a radical shift in school planning towards focusing on the needs of the health of the children, with pioneering new designs for schools by George Widdows in Derbyshire.

In Bristol, a number of “Open-Air Schools” were built specifically for children suffering from various forms of ill-health, the first being Knowle Open-Air School in 1913. These schools were built for children who had previously been excluded from school, partly due to the possibly of cross-infection in cases of disease, such as tuberculosis, but otherwise due to conditions, such as anaemia or malnutrition, which made them too weak to attend.

These schools held classes outside in the open air, but were not as Spartan as the name “open-air schools” might seem to imply. In fact, the children were extremely well cared for and many recovered sufficiently to go on to attend regular schools. (See The Open Air Schools of Bristol 1913-1957 by Jeannie Shorey, 1992). For less vulnerable pupils, two types of school design were followed in Bristol at this time. One was the “Verandah” type of school design. An example is St. Philips Marsh School which the Western Daily Press (6th November 1926) reported as being the first in Bristol “of what is known as the ‘Verandah’ type. Apart from the airy classrooms, a long and wide verandah runs the whole length of the building and may be open in the summer and closed by means of large windows in the winter months”. This made it close to being an open-air school during the warmer months.

Not everyone thought that this was the best solution, however. Describing the design of the new verandah-type school, “Dominie” (Western Daily Press, 13th August 1927) noted that “The classrooms now usually provide for one side to be opened by sliding partitions. Flushing windows and cross ventilation are also provided. There is thus a more ample provision for (the) supply of fresh air.”

However, he continued, “I am told by those who have experience of the rooms where one side may be entirely opened to the fresh air by sliding or rolling shutters or partitions, that whilst on the relatively few warm days the effect is excellent, yet during the winter months these rooms are very cold, often so cold that the children are unable to put forward their best mental efforts.”

The alternative was the “corridor-type”, adopted for both Sea Mills Junior Mixed and Infants schools, where the design ensured that each class was kept warm during the winter months whilst still providing ventilation.

With corridor-types, each room is entered direct from a central corridor. In addition each classroom has its own external door together with large windows on one side and clerestory windows above the corridor on the opposite side. These could be opened to provide fresh air and the all-important “cross-ventilation” to prevent the air in the classroom becoming stagnant. The windows also provided the classrooms with natural light illumination from both sides.

The design of these schools was state-of-the-art at the time. The Bristol Times and Mirror (16th Feb. 1928), recording the opening of Sea Mills Junior Mixed School, reported that:

“The new school, which is of the latest type, … provides accommodation for 400 children in eight classrooms of 50 each. It is a school for junior mixed children, and there are separate cloakrooms for girls and boys”.

“The school is of the corridor type, and each room is entered direct from the corridor. A folding partition between two of the classrooms permits a space when thrown open of 50ft. by 20ft. being used as one room when it is desired that the school should assemble all together”.

“There are three main entrances, the two end ones giving direct access to the cloakrooms, and the central entrance being convenient for the teachers’ room.”

Under the sub-heading “Latest Improvements”, the report continues:

“Each of the classrooms has also direct access to the playground, so that each class can be dismissed without interrupting the work of any other. “

“The heating is on the low-pressure hot water system, with inlet ventilating radiators to the various classrooms, each capable of being separately controlled to allow of the building being thoroughly warmed under varying climatic conditions… The school is lighted by electricity from the Corporation supply.”

“In the present school all the latest conveniences for the comfort of both scholars and teachers had been adopted, and special attention had been given to the ventilation and lighting.”

The “inlet ventilating” of the radiators was facilitated by grills open to the outside, placed in the external walls behind each radiator, via which external air would enter the classroom past the radiator. Warm fresh air would thus be circulated to the room. The perforated metal grills, painted light grey and set in the stonework, may be seen externally beneath one window of each of the classrooms.

All the main classroom windows faced south-south-east so maximising the provision of natural light and sunshine to the rooms.

In 1931, the Infants school block was opened. This was similar in design to the Junior Mixed block, apart from having six classrooms, the addition of an Assembly Hall, a Medical Inspection and Waiting Room, lavatories connected to the main block and “separate accommodation … provided for ablution.” The assembly hall has large windows on three sides and, on the fourth side, a similar arrangement to the classrooms of clerestory windows above the central corridor. As a consequence, the hall is ventilated and naturally illuminated on all four sides.

The block faces south-west, providing plentiful sunshine to the classrooms, and was built parallel to the river Avon providing extensive panoramic views over the Somerset countryside across the river.

The architecture of the schools reflects and complements that of the Garden Suburb, being a simple, mostly unornamented, neo-Georgian style. This simplicity of design of both the houses and the school buildings reflects the economic restraints of the time.

The design of the Infants school block, particularly the projecting wings at each end, is reminiscent of the terraces of 4 houses frequently seen in Sea Mills, such as Dorlonco type DLB5 shown below.

Writing in the Western Daily Press of 13th August 1927, Dominie reflected that: “The very substantial council schools built twenty years ago, or thereabouts, in many instances had an attractive design with modest embellishments”, but, to his disappointment, “All unnecessary architectural embellishments are to-day rigidly excluded from new school buildings.”

The Sea Mills School buildings are distinguished by their restrained neo-Georgian simplicity, the proportions and design of which have an elegance which is balanced by the robust appearance of the stonework. This is similar to that of the adjacent landmark building, St. Edyth’s Church (Oatley and Lawrence, 1928), which is closely visible from many parts of the school.

The red tiled hipped roofs of the school blocks are in keeping with the predominant roofscape of the Garden Suburb.

The architect who designed both schools was Alfred E. Oaten, a prolific local architect whose work included public buildings, commercial buildings, and houses. His commercial buildings included the Charlton Cinema, Keynsham, and, as Holbrow & Oaten, the Magnet Cinema, 53 Newfoundland Street, Bristol. A search for “Oaten” in the Bristol Record Office online catalogue gives an idea of the considerable extent of his work, although the listing is incomplete.

His obituary in The Builder (v 163, 7 Aug 1942, p118) states: “Mr. A.E.Oaten has died in Bristol at the age of 62. Formerly in partnership with Mr. H.O.Holborrow [sic], he had practised on his own account since 1910, and designed several commercial buildings and schools in Bristol. Since 1927 he has been architect to the Redcliffe Vestry. Mr. Oaten was a Fellow of the Chartered Surveyors’ Institution and a member of the Bristol Society of Architects.”

The building contractor for the Junior Mixed School was G. Slade & Son of Shirehampton. The heating system was provided by Messrs. James Crispin and Sons of Nelson Street, Bristol.

Original Plans and Elevations for the Schools We have been unable to find the original plans for the Sea Mills School buildings either in the National Archives at Kew or in the Bristol Record Office.