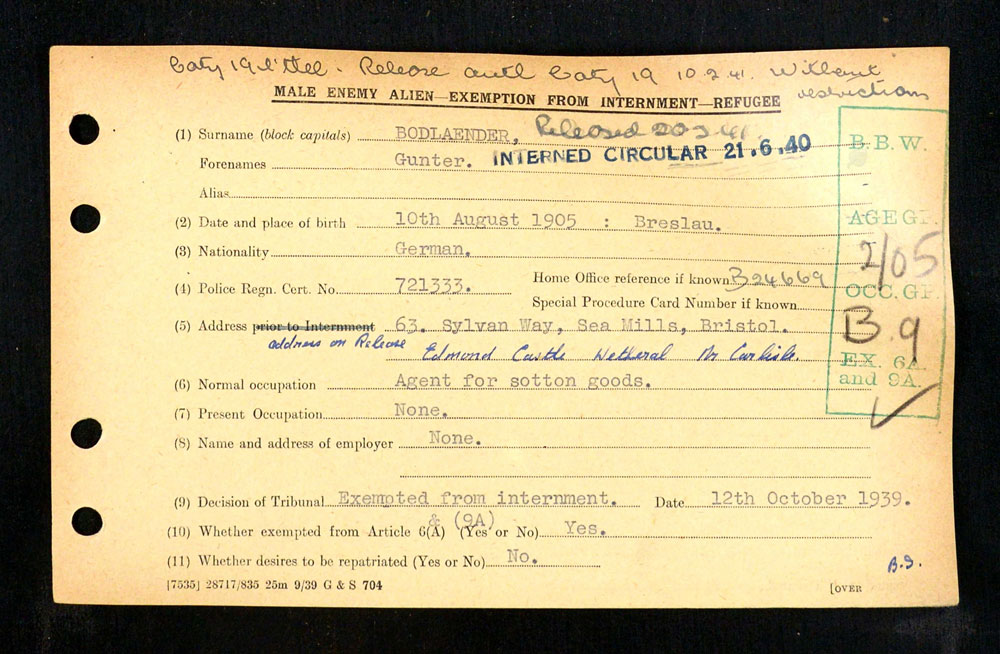 Sea Mills in particular seems to have a track record of “taking people in”. During WW2 dozens of American GI’s were billeted around the estate and are mentioned in many of the memories we have collected including those of Brian Gearing, the Creed family and the residents of Failand Crescent. Some families like the Howells took in members of ENSA (Entertainments National Services Association) and also refugees.

Bristol welcomed refugees fleeing Nazi persecution in the 1930s – famously, the scientists who worked at the Wills Physics Laboratory . Here we remember what we know of some of the refugees who stayed here in Sea Mills.

Thank you to Ruth Crumey-Davies for this wonderful research. We would be very keen to hear from anyone who knows more about these people or the families who sheltered them.

Kurt Dietzschold was a saw miller from Leipzig, Germany. He born in January 1888.

There is no indication of how he arrived in Bristol or when but by the time of The1939 Register he was living with the Capern family in Coombe Dale. He is described ‘No occupation – Refugee’.

In 1940 his name appeared in Die Sonderfahndungsliste GB (The Special Search List GB, later known as The Black Book). Following the evacuation of Dunkirk the Schutzstaffel (SS) compiled a list of prominent people living in Britain who were to be arrested on invasion and occupation of Britain. This list included European exiles. A September 1945 edition of The Manchester Guardan reported that it had been discovered in Berlin.

It gives his address as Pembrok (sic) Road, Clifton although he might not have been living there by the time the search list was published. The code, ‘RSHA Amt IV’, at the end of the entry meant that the Gestapo, the secret police, would seek to detain him.

As ‘an enemy alien’ Dietzschold had to undergo an interview to decide whether he should be detained or allowed to live in the community.

Initially, in October 1939, he was exempted. The Home Office record shows that, unsurprisingly, he did not want to be repatriated.

However, an update records that during 1940 he was interned in Denbighshire, Wales.

After the war Dietzschold remained in Wales; in 1945 he married Martha Patricia Ryding in Wrexham. He became naturalised British in November 1949.

Günter Bodlaender, the son of Sally and Selma, was born on 10 August 1905 in Breslau (now Wrocław, Silesia, Poland). His father registered the birth on 15 August. The Breslau Synagogue community archive shows 25 adults with this name living in the city. Günter and his parents were living at 39 Schwerinstrasse.

From 1924 Günter worked for a number of textile companies. In April 1935 he married Ilse (or Else) Müller, a tailoress who made women’s clothes. Günter was Jewish and Ilse was Christian but following attacks in the city they emigrated to Prague in 1936.

Günter had contacted HICEM, the organisation in Paris which helped Jews to escape the Nazi regime. At first HICEM had refused support so the couple had had to emigrate directly from Germany. After closer examination, the HICEM secured support because Ilse now wanted to convert to Judaism. Günter’s words are quoted in Wolf Gruner’s Deutsches Reich 1933–1937:

‘From the local HICEM, I received today that you will endeavour to get my wife and me [the] Visa for Uruguay. Although I assumed, after I had already been vaccinated, my passport already after about 12 days in the hands of the HICEM, is that everything was fine, but this does not seem the case, as I am expressly written [to]: the Parisians will try to get the visa.

NB Do you know what it means already 13 months without being able to act, only tolerated by the authorities to live here? That breaks your nerves. I have to be able to work again’

In August 1937 he asked for support to emigrate to the Philippines. Finally, the family were able to escape to the UK before the outbreak of World War Two, when the British government stopped allowing emigration from Nazi-controlled countries. The 1939 Register was taken on 29 September. The family were described as refugees and they were living with Harold and Ida Mogridge on Sylvan Way.

Officially Italians, Germans and Austrians – including Jewish refugees – were viewed as ‘enemy aliens’, potential spies, propagandists and so on.

They were assessed and classified by one of three groups depending upon how dangerous they might be (class C presenting the least perceived danger to the state).

Günter was released without restriction in February 1941 but he was sent to Edmond Castle, near Carlisle, where Czech refugees were housed during the war. Afterwards the family didn’t settle in Sea Mills; the couple are mentioned in a Norwood local newspaper item about rent reductions in 1948.

In January 1950 Günter received his Naturalisation certificate. His certificate is an open public record but his application contains ‘sensitive’ details and it will remain closed until 2051.

The Home Office reference number on his exemption certificate is quoted in The National Archives catalogue description; the sensitivity might date to the internment years.

Ilse went on to make a Naturalisation application as the wife of a British man. Her certificate was issued in March 1950.

Günter’s death in Croydon is recorded in the January-March 1960 General Register Office index.

Ilse was still listed in the South Croydon electoral roll in 2007.

Josef Pfaffel was born in Germany in December 1895. He served in the 10. bayer. Infanterie-Regiment (Ingolstadt) I. Ersatz-Bataillon during the First World War.

After the war, he went into business but serving his country and working hard in civilian life meant nothing under the Nazi rise to power. He appeared on a register of loan brokers and property agents which was compiled in Munich.

His nationality was annulled in 1938: ’German citizenship declared to be lost by publication from 14 April 1938 published in No. 90 of the German Reichsanzeiger and Prussian State Gazette of 20 April 1938’.

By the time of The 1939 Register Pfaffel was living with Henry Makin and his family on Westbury Lane. He was described as ‘Refugee from Nazi aggression’. Having fought against the British he now found a place of safety in Britain. Henry Makin opened his home to a refugee but – bitter irony – would become a Prisoner of War a few years later, his wife and daughter would be killed in an air raid over Bristol and his son lost at sea.

In 1940 Pfaffel’s name appeared in Die Sonderfahndungsliste GB (The Special Search List GB, later known as The Black Book). Following the evacuation of Dunkirk the Schutzstaffel (SS) compiled a list of prominent people living in Britain who were to be arrested on invasion and occupation of Britain. This list included European exiles. A September 1945 edition of The Manchester Guardan reported that it had been discovered in Berlin.

There was no known address at the time the search list was published. The code, ‘RSHA IV’, at the end of the entry meant that the Gestapo, the secret police, would seek to detain him.

Pfaffel settled in west London after the war (the 1946 electoral roll lists his address as 51 St Stephen’s Gardens) and became naturalised British in June 1949. The Home Office copy of his naturalisation certificate records that he was the director of a leather and plastic goods company. It appears that there was a delay (‘post-suspension’) – the file for his application is closed until 2050.

Other sources:
Internees at liberty in UK accessed from https://www.findmypast.co.uk/
Naturalisation application is closed to 2050. An FOI request can submitted from https://discovery.nationalarchives.gov.uk/details/r/C13307465

From November 1938 the Reich Ministry of the Interior restricted the freedom of movement of Jews. So far there is no indication of her journey to Bristol or when she arrived.

She had been a language teacher but in the 1939 Register she was recorded as a widow and refugee, working as a housekeeper and living in the Hayman household on Shirehampton Road.

In October 1939 she was exempted from internment but her date of birth is noted incorrectly as 21 September 1882. At this time she was living with Mrs Christine Bodey in Sabrina Way – just over the Trym but recorded at Sea Mills in her paperwork of the time.

She became Naturalised British in January 1948. By then she was working as a cook and chilren’s nurse in Putney, south west London. The correct date of birth is in this Home Office copy of the record.